Learn how Digital Strike worked with one our of mobility dealerships to craft new landing pages designed to improve conversion rates and properly source digital leads into their CRM.

At Digital Strike, one of the most gratifying parts of what we do as a team is coming together to create breakthrough solutions for our clients.

Oftentimes, under the right conditions and circumstances, the solutions that we provide produce returns that even we could not have anticipated.

The following is one of those times.

A History of PPC Skepticism

A respected member of the National Mobility Equipment Dealers Association (NMEDA), A&J Mobility boasts five locations throughout Wisconsin as the state’s leading dealer of wheelchair-accessible vans and other mobility equipment.

Just prior to the summer of 2019, their team expressed to us the need to acquire more leads online from prospective buyers. More than that, A&J also wanted to generate those leads at the most minimal average cost possible, and then incorporate a way in which the lead data could be incorporated directly into their CRM system.

Traditional media had worked well in the past, they said, but through their own research, A&J also knew that a considerable number of competitors were pulling ahead in the arms race thanks to digital marketing — particularly paid advertising on Google.

Deep down, management was fully aware that a digital presence was needed, but understandably, there was still skepticism regarding how quickly and to what extent a type of marketing unfamiliar to the organization could improve their bottom line.

Over the years, A&J Mobility had cultivated a reputation for unsurpassed customer service and products that are meticulously customized to fit each of those customer’s specific needs — which have combined to earn the company more than 300-plus five-star reviews online.

This reputation moved the needle through older forms of advertising. Now it was time to apply that recipe for success in the digital space.

We started by building out a number of campaigns in a new Google Ads account, each segmented to fit one of A&J’s five locations throughout Wisconsin: De Pere, Eau Claire, McFarland, Richfield, and Valders.

With each campaign, the idea was to capture a high percentage of clicks from only those people whose need for a wheelchair-accessible van was immediate enough to inspire them to take specific action while on the A&J website, such as a phone call to the dealership or a form submission to request a meeting with a member of the sales team.

This would be accomplished by incorporating the three essential ingredients of PPC success:

The new Google Ads campaigns were activated in mid-June. Over the next six weeks, they accrued more than several thousand dollars in click costs, but results were stagnant.

The overall conversion rate was only 1.5% — well below the industry average — and we were spending roughly $220 per conversion.

Exasperated, both parties agreed that something further had to be done.

We had selected keywords that were confirmed as being used by A&J’s target market. The quality of the traffic originating from the campaigns was high.

The copy of the ads matched up with that of the site, and the data indicated that each ad was receiving clicks from the right people. As a result, we also knew, without a doubt, that the right people were landing on the site after clicking through our ads.

Everything we look for checked out. The problem had to be elsewhere.

Re-evaluating the page upon which this paid traffic was landing revealed the root cause.

A poorly optimized landing page that gave too many options.

A new landing page designed with a clear goal and path to convert.

We Have A Landing Page Problem

Up to this time, we had been operating with only two of the necessary three ingredients of PPC success. We were missing a properly optimized landing page.

In each of the ads that were created within the new Google Ads campaigns, we were directing visitors to the main inventory page of the A&J website.

At a glance, this page seemed to have everything — because it nearly did.

It allowed visitors to sort through A&J’s entire van inventory using a number of customizable filters that included vehicle condition (new vs. used), use type (personal vs. commercial), and a whole host of other vital criteria, such as make and model, and options for wheelchair entry access.

An impressive array of images and videos of each vehicle was a click away from the main inventory page. And on the individual vehicle pages, there was a built-in calculator feature to give prospective buyers an idea of what their monthly payments would be over the course of 3-10 years — complete with options to factor in values for a down payment and/or trade-in.

If you were in the market for a wheelchair-accessible van, landing on the main A&J inventory page could potentially give you enough info to research for hours.

And that was precisely the problem.

Visitors were being presented with far too many options, and these options were concealing the true purpose of the landing page.

The purpose was to have someone call or fill out a contact form and then peruse the inventory, after the desired action had been taken. Instead, the page was saying, “Hey, come on in and stay a while. Look around for as long as you want and maybe let us know if you have any questions.”

And the result was wasted advertising dollars — albeit on what appeared to be visitors who had a legitimate interest in buying or leasing a wheelchair van.

Our next goal had become clear. We needed to design an entirely new landing page, one that was free of distraction, featuring only the minimum amount of information someone would need to convert. This would allow these already-qualified visitors to take the action that A&J originally intended.

In other words, we needed less to be more. 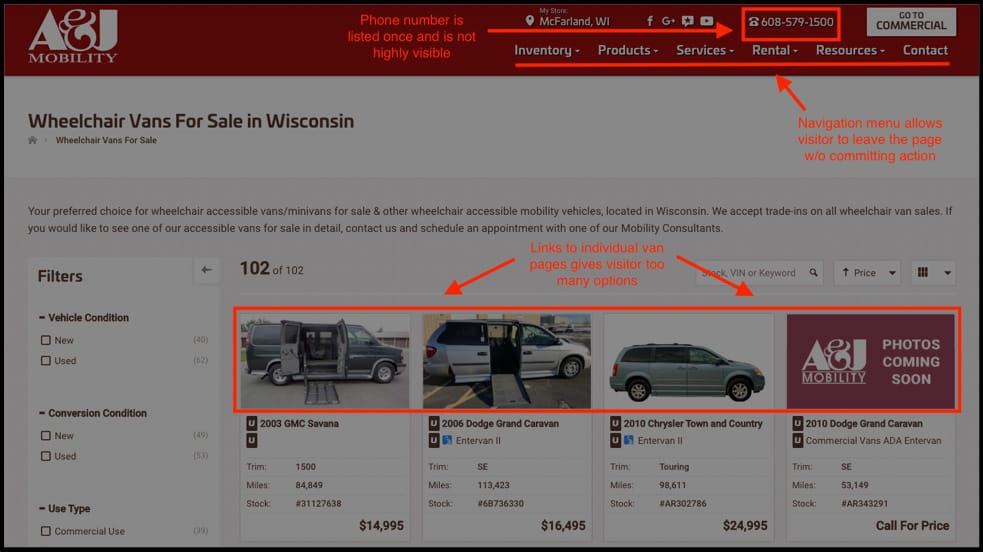 When we had our first meeting with A&J to pitch the new landing page concept, it was imperative that we educate them on how a page with far less information would give a visitor a far better chance of becoming a prospect for a new wheelchair van.

We explained that the concept was to limit the number of choices available to each visitor. In short, visitors would have two options: Engage A&J by calling the office or filling out a contact form to request a callback — or they would leave the page.

This approach may have sounded a tad harsh, but we assured them it was the only way to get the get the most out every click from the new Google Ads campaigns. Otherwise, we would continue to waste money on people who would wander the site looking at van options but little else to truly move the needle.

The layout of the new landing page was constructed by strategists and developers at Digital Strike with all of the nuts and bolts required to clarify to visitors what A&J wanted them to accomplish and then easily allow them to do so.

Here’s how we made that happen: 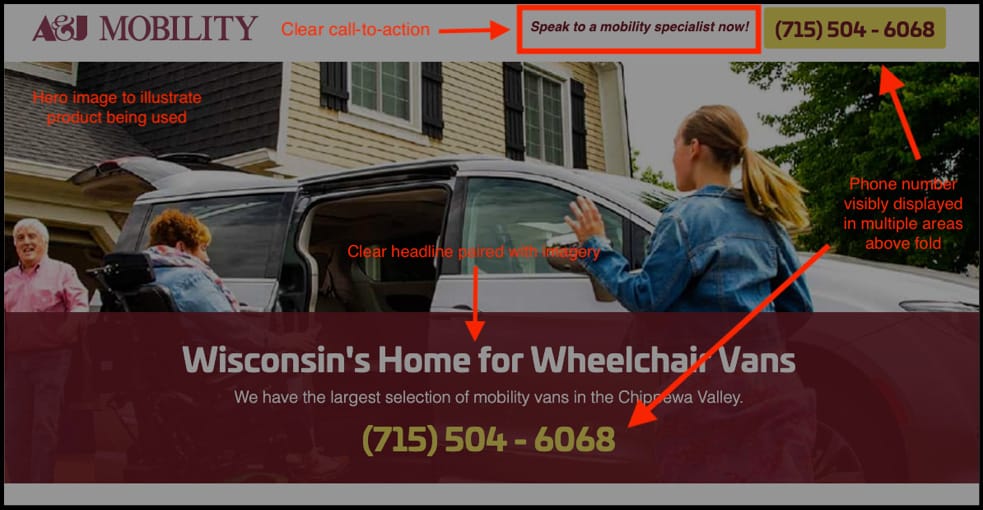 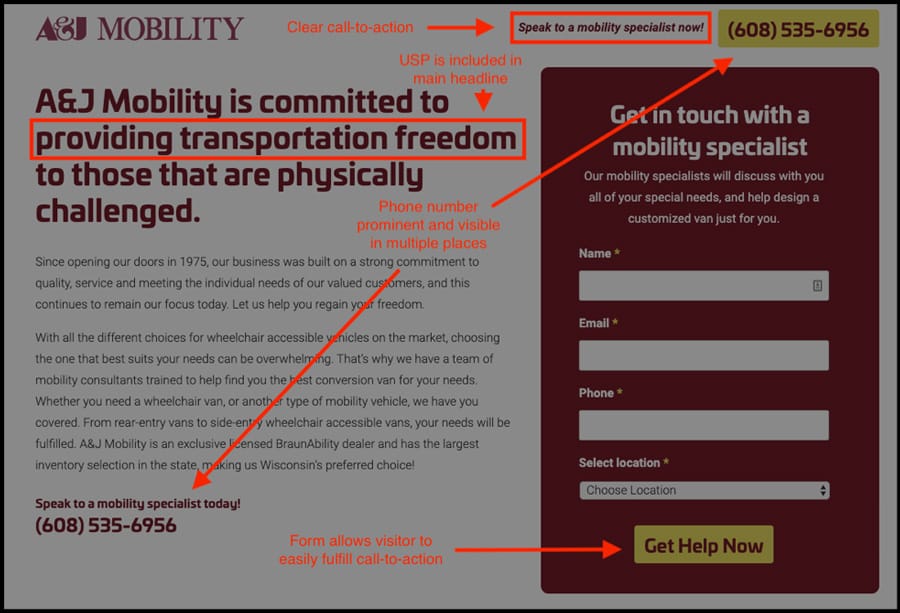 Read more on our approach to landing page design.

Once the new landing page layout was published and implemented, its effects were evident almost immediately.

August 1 was the first day using the new landing page. By the end of the month, the conversion rate of the Google Ads campaigns conversions (calls and form fills) at an average cost of just over $77, nearly three times less than what A&J had spent per conversion the month prior.

This would not to be an isolated incident. 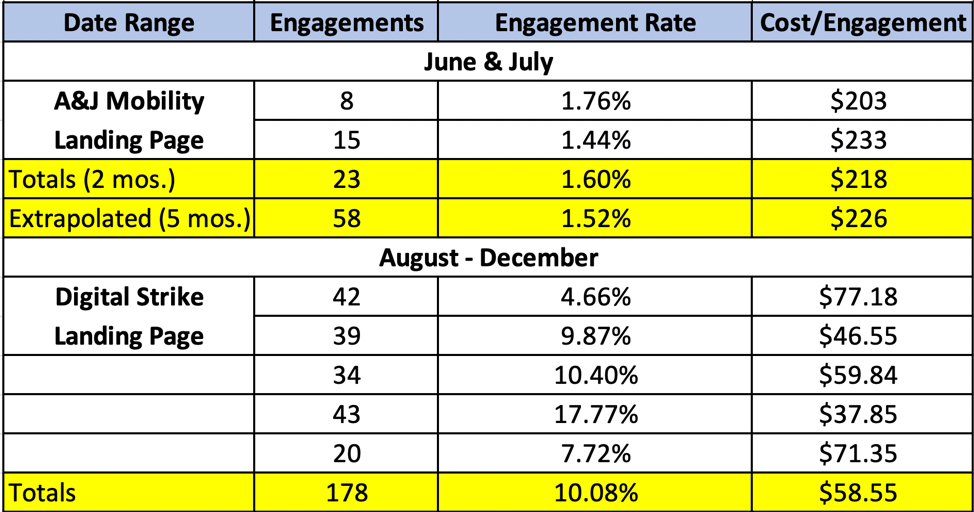 Over the next four months, A&J received an average of 34 conversions per month. This included a total of 20 in December, notoriously one of the company’s slowest months of the year.

To assign equal weight to the periods before and after the landing page change, we extrapolated data from June and July to create a five-month sample size and found that the new landing page still vastly outperformed the previous version.

The benefits of the new landing page paint even a starker contrast when you dig a little deeper into the numbers:

The new landing page was doing its job and doing it very well. And A&J soon started to see a tangible benefit from the increased number of conversions.

Given a much clearer message and more direct instructions on what to accomplish, prospective buyers were now walking a defined path to the top of A&J’s sales funnel, where they could then be walked through the rest of the sales process, as controlled by the A&J team.

Finally, as impactful as these numbers would gradually become for A&J, we knew prior to building the new landing page that we also needed the capability to accurately track every conversion that took place, which is something that, unfortunately, could be incorporated into the old strategy.

Without proper attribution, we would not be able to get the full story behind each conversion, including knowing what campaign, ads, keywords, etc. were responsible for each new call or form fill.

Having this data would be invaluable in determining what optimization techniques we should apply to the campaigns to further enhance performance and improve the conversion rate to capture even more opportunities.

It also provided the dealership’s management and sales teams with a centralized lead dashboard, a place where any member of the organization could log in at any time to grade each lead based on quality, as well as reference critical data on each prospect, including name, city, phone number, email address, and vehicle preferences.

All of this data was also simultaneously integrated with the dealership’s existing CRM system, where it could be stored to be used down the line in accordance with internal follow-up processes.

Where you send your paid traffic matters.

The right keywords and sparkly ad copy won’t do a thing unless the landing pages you’re using don’t convert the traffic from paid ads.

And how effective your landing pages are at converting your site traffic will go a very long way in determining whether or not your visitors accomplish what you want them to accomplish.

Allow them this opportunity, and you could see your business grow over time, no matter the product or service.

Fail to do so, and what’ll find are advertising dollars wasted on visitors that arrive to and leave your site without doing much of anything to improve your bottom line.

It goes without saying that not every visitor to your site will do what you want them to do. This is a cold, hard fact for any business.

But even if you’re able to give a small percentage of your visitors the ability to commit a desired action through a solid landing page approach, you might be surprised at the type of snowball effect this could have — potentially right away.

Your success story starts with a free consultation.